One of the most ancient and extraordinary monasteries in the world – David-Gareji monastery complex is located on the Georgian-Azerbaijani border, 70 km from Tbilisi. David-Gareji is dated to the VI century. The history of the monastery keeps many secrets, ups and downs, and exciting moments that have had a significant impact on the history and life of Georgia. Among the locals, there is even a belief that visiting a monastery is equivalent to a pilgrimage to Jerusalem. The monastery owes its existence to one of the 13 Assyrian Fathers, David Garejeli, who undertook the preaching of Christianity in these lands. The Holy Father settled in one of the natural caves and soon founded the first monastery. The monastery was called “Lavra of David”. 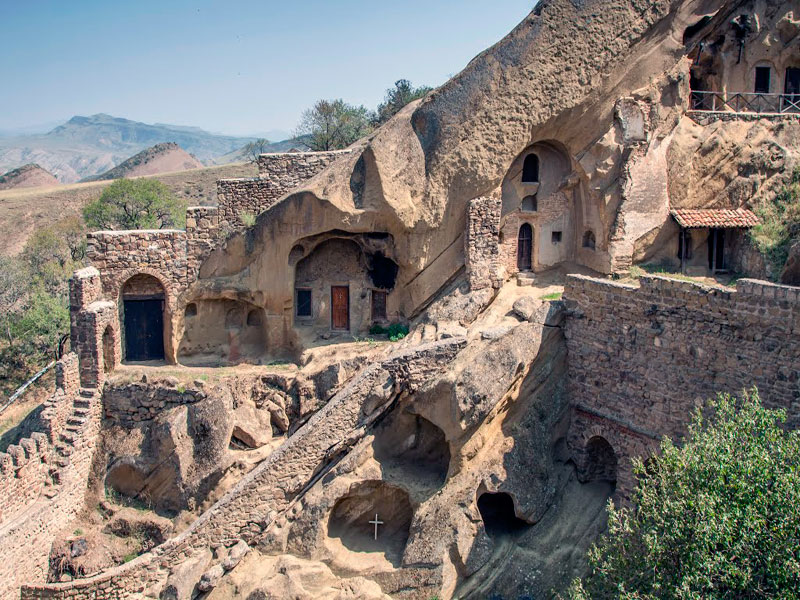 The monastery complex of Gareji is an ensemble of 19 caves and is considered a masterpiece of Georgian art. The monastery and caves carved into the rocks stretch on the semi-desert slopes of Mount Gareja for about 25 km. In addition to the churches and chapels, Gareji had many caves for everyday use: the caves served as sheds, bakeries, smithies and cattle dwellings. Due to its active religious, cultural and political activities, the monastery was occasionally subjected to enemy attacks, especially by the Mongols, who in the 13th century plundered and destroyed it, burned manuscripts and relics. In the same period, the art school was destroyed, which was famous even outside the country.

The monastery is of great historical value due to unique frescoes depicting scenes from the life of St. David, as well as portraits of Georgian kings and politicians of the Middle Ages. The walls of most caves also contain traces of frescoes; some of them are completely preserved and almost untouched. In the Middle Ages, the Garedji desert with its cave monasteries served as one of the most important monastic and pilgrim centres of Georgia. It was truly a royal monastery, literally and figuratively.