The term “cultural heritage” has significantly changed its content over the last decade, partly because of the tools developed by UNESCO. Cultural heritage is not constrained by monuments or collections of material objects of art. It also includes traditions and customs inherited from our ancestors and transmitted to our descendants, such as oral traditions, performing arts, festivals, rituals, concerning nature and the universe, as well as knowledge and skills for the production of handicrafts.

Georgia is a country with truly outstanding landscapes, medieval churches, monasteries and ancient traditions. Let’s take a closer look at the objects of both tangible and intangible heritage by UNESCO in Georgia. 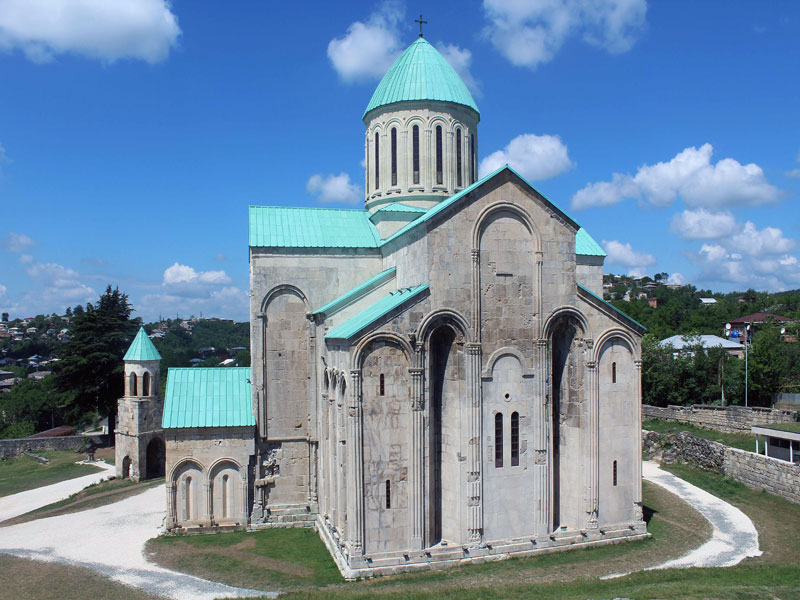 Bagrati Cathedral and Gelati Monastery were inscribed on UNESCO list in 1994. Both are ancient monuments located in Kutaisi region, the ancient capital of Georgia.

The construction of Bagrati Cathedral, named after Bagrat III Bagrationi, the first king of united Georgia, started at the end of the 10th century and had been completed by the early 11th century. Partially destroyed by the Turks in 1691, its ruins still lie in the centre of Kutaisi. 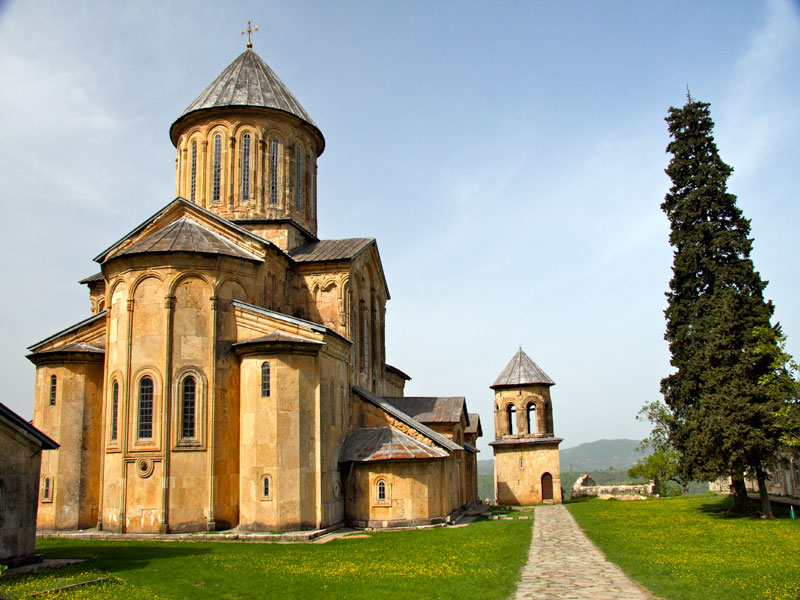 Gelati Monastery, whose main buildings were constructed between the 12th and 17th centuries, is a well-preserved complex, with wonderful mosaics and wall paintings. The cathedral and monastery symbolize the flowering of medieval architecture in Georgia.

Gelati Monastery is a vivid symbol of Georgia’s Golden Age. It was built under King David the Builder (Aghmashenebeli), where he was buried. For a long time, the monastery was not only a religious centre of the country, but also a major cultural and educational place with its own academy. The Academy at the monastery became the cradle of science, culture, and had made an invaluable contribution to the education of the Georgian people. Many valuable icons and other church relics had been preserved in the monastery until the Soviet period, however, during the Bolshevik regime some of them got lost, and the rest of the treasures were distributed to museums.

The historic churches of Mtskheta, the former capital of Georgia, are outstanding examples of medieval religious architecture in the Caucasus. They show the high artistic and cultural level attained by this ancient kingdom. Historical Monuments of Mtskheta are located at the confluence of the Aragvi and Kura rivers in East-Central Georgia, just 20 km away from Tbilisi.

Mtskheta was once the ancient capital of Kartli, a place where Christianity was declared the official religion of Georgia in 337. Today, the city is still the residence of the Georgian Orthodox Apostolic Church.

Favourable natural conditions, a strategic location at the crossroads of trade routes and close relationship with the Roman, the Persian and the Byzantine Empires contributed to the development of the city and led to the integration of different cultural influences with local cultural traditions. After the 6th century AD, when the capital was moved to Tbilisi, Mtskheta continues to maintain its leading role as one of the important cultural and spiritual centres of the country.

Holy Cross Monastery of Jvari and Svetitskhoveli are key monuments of the medieval Georgian architecture. 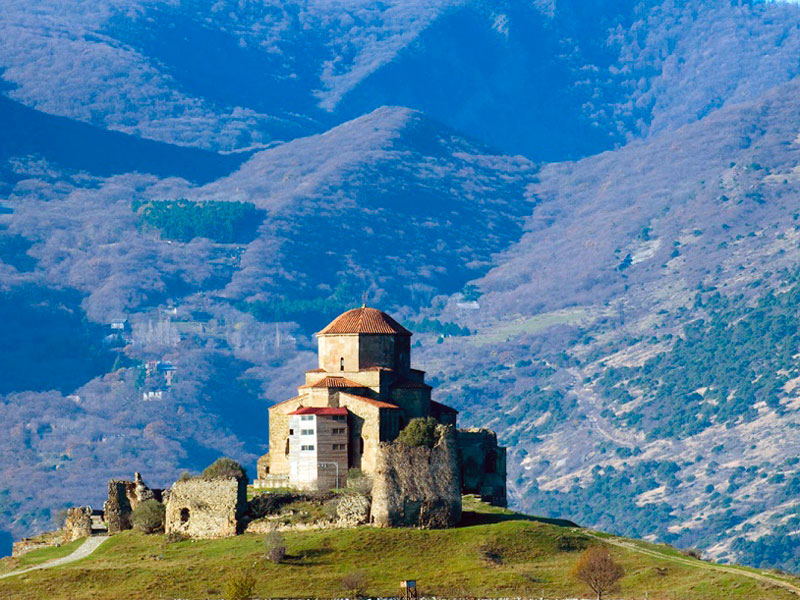 The masterpiece of the early Orthodox Church architecture, Jvari Monastery dates back to 585-604 BC. Located on a hill near the town of Mtskheta, it was listed as a UNESCO World Heritage Site in 1994. The name is translated as the Monastery of the Cross. It has a legend that pilgrims visiting the monastery, shed tears while praying, and so the nearby natural lake was called Lake of Tears. The monastery is still in use for major religious ceremonies. 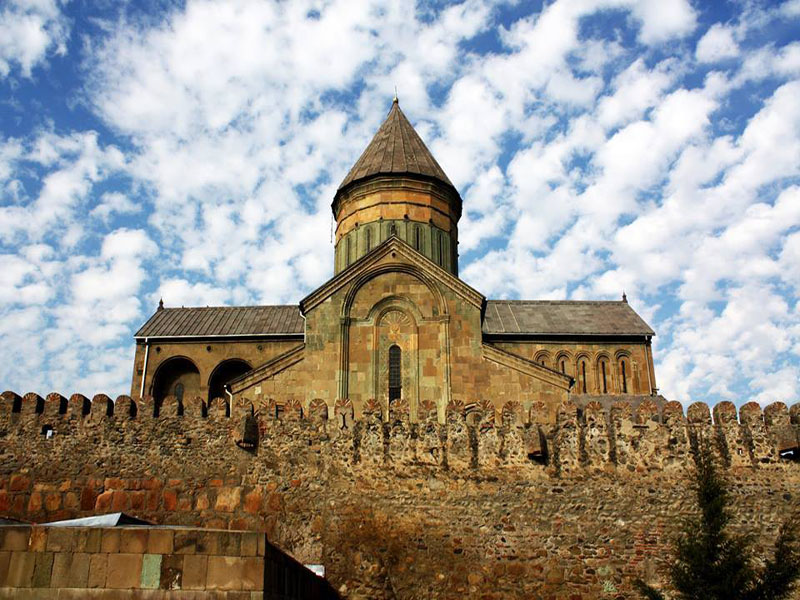 Another significant Christian cathedral in Mtskheta is Svetitskhoveli built in the 1010-1029s. This is one of the main places of pilgrimage on the Silk Road, the robe of Christ’s burial place, the tomb of the Georgian kings and the most frequently visited tourist facility in Georgia.

Preserved due to its unique geographical isolation, mountainous landscape of Upper Svaneti is an exceptional combination of mountain scenery with medieval villages and tower houses. It is because of its unique landscape that Svaneti became a popular attraction for many tourists.

The region occupies the upper reaches of the Inguri River and consists of several small villages scattered on the slopes of the mountains, among the gorges and alpine valleys with a magnificent background of snow-capped mountains. The most notable feature of the settlement is the abundance of towers above the houses. For example, the village of Ushguli is the highest settlement in Europe, situated at an altitude of 2300 m, it still retains more than 200 very unusual house-towers. These towers were used both as dwellings and defence means against invaders. Nowadays about 70 families live in this 2000 years old village. Within winter, the snow covers the whole area, and sometimes even the way to Ushguli. However, a small school is always open, and life goes on.

The village is located 45 km from the town of Mestia – Svaneti’s centre. In order to get to Ushguli, you will need local jeeps 4×4, which can be hired in Mestia. The road to the village is difficult and takes about 3 hours each way. The road passes through several villages where you can find small churches with old paintings and frescoes inside.

Svaneti is one of the most remote and inaccessible areas of Georgia- a true paradise for ski lovers, adventurers and eco-tourists. Svaneti preserves pristine medieval appearance. Time seemed to deform here, taking you back through centuries. No matter how complicated the road trip to Svaneti is, it is worth every effort! 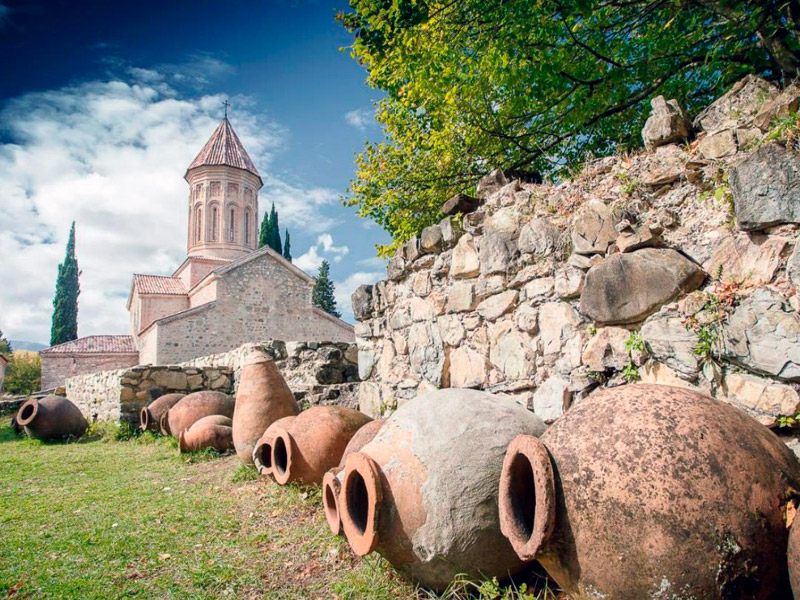 The traditional method of winemaking in Georgia through the fermentation of grapes in clay, egg-shaped vessels are listed as World Heritage in the field of education, science, and culture of the United Nations (UNESCO). According to the UN, an ancient method of native Georgian winemaking – kvevri is a part of the intangible heritage of humanity.

Large earthenware jars, traditionally used for the fermentation of grape are called kvevri. It is archaeologically proved that they have been in use for more than 8000 years.

Vessels are usually buried in a special basement, called Marani, which can be found in almost every house and is considered a semi-sacred place for the majority of Georgians.

Choose the Tour to Georgia you like most and tour-operator MyGeo will organize your amazing Holiday in Georgia. Travel to Georgia with MyGeo.