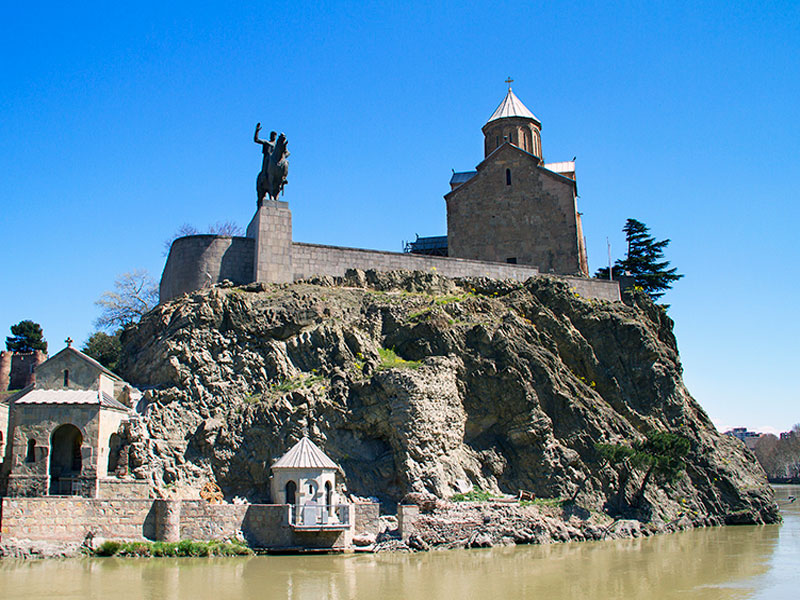 Metekhi Temple of the XIII century is one of the most popular sights of Tbilisi. It is located on a high rock, on the right bank of the Old City. It stands peacefully away from the noisy city center on the bank of the Kura river, on a rock.

The name of the temple comes from the Greek word “metochia” and is translated as a palace. The modern name Metekhi appeared only in the XVIII century.

The temple was built next to the royal palace. The temple and the palace were surrounded by powerful walls, but even the fortifications did not save them from the invasion of the Mongols. Metekhi temple was also partially destroyed. After the Mongols, the Turks came to the temple, then the Persians, and after each invasion, the kings restored the church. However, the difficult fate of the temple was not over. In the Soviet years, the church was turned into a prison and there was even a plan to demolish the church. Thanks to the artist Dmitry Shevardnadze the most important part of the history of Tbilisi and Georgia was saved.

Metekhi Temple is a classical cross-domed building. The southern wall of the temple suffered from invasions and multiple reconstructions. On the north side, there is a covered porch. The walls of the porch are decorated with carvings, which are unique specimens of the XII – XIII centuries. Near the temple, there is a monument to the founder of Tbilisi Vakhtang Gorgasali.