Holidays are an integral part of the culture and history of any country. In Georgia, a country with a rich history and culture, there is an abundant number of holidays and festivals. One can safely say that in Georgia every day is a feast: mountains and the sun, hospitable people, delicious cuisine and, of course, the sea of wine, without which any holiday can do! Today we will tell you about the most interesting and important state and national holidays in Georgia, about their history and traditions of the celebration, as well as provide information on public holiday days and red-letter days in 2017.

St George’s Day, or Giorgoba, is celebrated on November 23 each year, in memory of the torture of St. George the Victorious during the reign of Emperor Diocletian in 303. As one of the patrons of Georgia St. George is the most revered and honoured saint and great martyr in Georgia. According to local belief, he was a relative of St. Nino, who turned Georgia into Christianity and bequeathed to her descendants to honour the memory of the great Martyr, who stood up for all Christians and as a result, was subjected to a terrible death. Since ancient times, many churches that bear the name of St. George were built in Georgia. In the Middle Ages in different parts of Georgia, 365 chapels commemorating the name of St. George were built, just exactly as the number of days in a year.

This holiday is not only one of the most important religious Christian holidays in Georgia but also equated to the public holidays, which means that the whole country is having a rest on this day. 23d of November is a non-working day in Georgia. In all the churches of the country, solemn liturgies are held, people celebrate this holiday with their families over richly covered tables where wine and toasts flow like water. But the luckiest ones are those with the name George: they get most of the attention and gifts in honour of their name-day.

St. George is honoured among Catholics, Orthodox and Eastern Orthodox churches. According to the Eastern Orthodox tradition, he is depicted as part of the iconographic emblem as a rider on a horse slaying the dragon or snake. In Georgia, the image of St. George is embodied in the state coat of arms. The same motif is widespread in the religious paintings, icons, souvenirs and trinkets that can be found in almost every Georgian church.

Holidays in Georgia: Georgia’s Independence Day – 26 of May 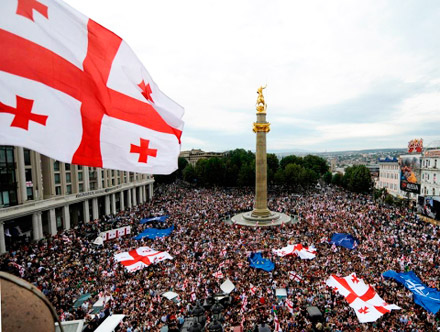 Georgia marks the celebration of the Independence Day on May, 26. The date is associated with the creation of the First Democratic Republic of Georgia in 1918. In the early 19th century Georgia became part of the vast Russian empire. After the Revolution of 1917, Georgia became an independent country and declared itself the Democratic Republic on May, 26 in 1918. In 1921, Georgia was defeated after the invasion of the Soviet army and became part of the Soviet Republic.

Georgia gained its independence for the second time after the collapse of the Soviet Union on April 9, 1991. April 9th is essential for the country – it is the day of national unity when the entire Georgian nation honours the memory of fallen soldiers who gave their lives for freedom and independence of the country. The Independence Day is brightly celebrated across the country with military parades, fireworks, concerts, fairs and official ceremonies.

The 9th of April and 26th of May are red-letter days in Georgia. 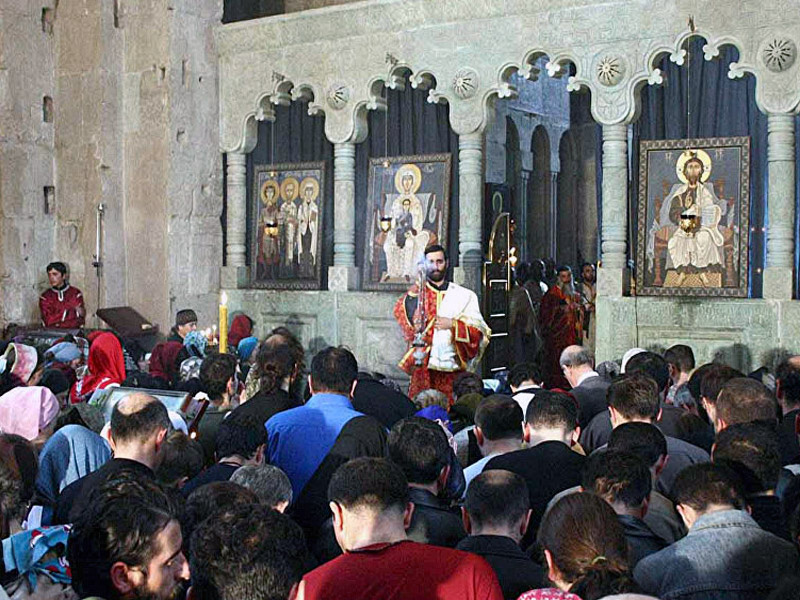 Georgian Orthodox Church celebrates the feast of Mtskhetoba-Svetitskhovloba – the ancient capital of Georgia and its legendary cathedral – on the 14th of October. The main hero of the celebration is the great Cathedral of Svetitskhoveli, built in the 4thcentury during the reign of King Mirian III, the first Christian ruler of Georgia, who was converted to Christianity through St. Nino – the preacher of the Christian doctrine.

The place for construction of the cathedral was not chosen randomly. Legend has it that on Mount Mtskheta, at the burial site of Saint Chiton, in which Jesus was executed, a sacred cedar had grown; it streamed with sacred myrrh which was healing people from diseases. The people called the cedar as “life-giving pillar” or Svetitskhoveli in Georgian. King Mirian III decided to build the first Georgian church at the place of the sacred cedar, and later the church took its name and was called from then on as Svetitskhoveli. Every year in the Cathedral of Svetitskhoveli a solemn liturgy with the participation of the Patriarch of All Georgia is held. After the worship, a mass baptism of people at the confluence of the Kura (Mtkvari) and Aragvi rivers takes place.

Mtskhetoba attracts people from all corners of Georgia. Tourists are very lucky to get to this festival because Mtskheta – the ancient capital of Georgia – is transformed into one big happy holiday town, where folk dances, performances, contests, fairs replace each other.

Holidays in Georgia: New Year and Christmas – 31 of December – 7 of January 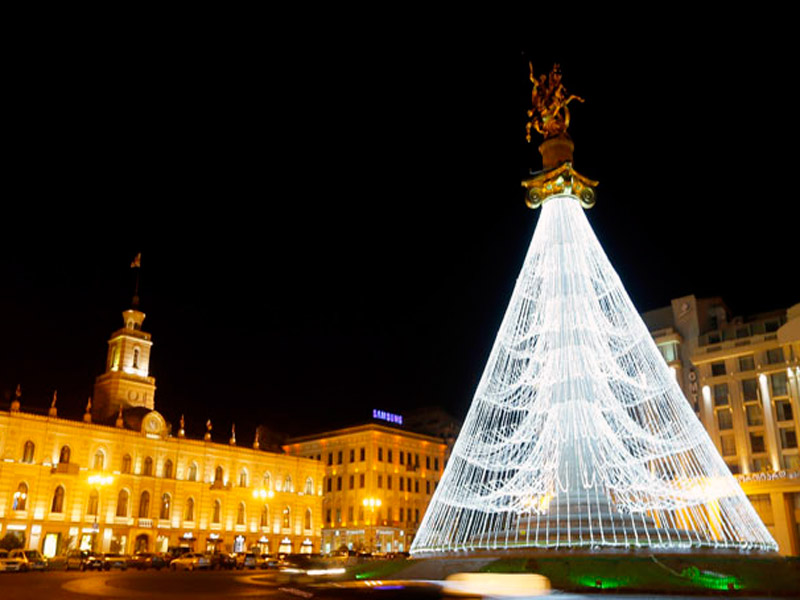 New Year is the most favourite secular holiday in Georgia, which is celebrated with gaiety and scope inherent only to the Georgians. The Georgians are one of the most hospitable people in the world, and it is easy to prove: on the New Year’s Eve every self-respecting host lays a table which is literally breaking from a variety of traditional dishes and viands! On a Georgian New Year table are necessarily present satsivi, khachapuri, lobio, roast suckling pig, homemade cheeses, pickles, kozinaki (nuts and honey) and churchkhela. There is a sign that the more sweets will be on the table, the more successful will be the coming year.

In Georgia, there are a number of symbols and beliefs related to the New Year. Worldwide people decorate fir tree as a symbol of the New Year. Georgia is no exception: Tbilisi is brightly decorated with Christmas lights, Christmas trees, angels’ figures, Star of Bethlehem, palm branches, which symbolize the peace. However, in Georgia from through centuries, there has been an interesting tradition to cut “chichilaki” from a walnut branch. “Chichilaki” is traditionally decorated with dried fruit, nuts and sweets, and then after the holidays is burnt. According to the belief, along with its smoke and ashes all the troubles and problems that have accumulated over the year fade away. 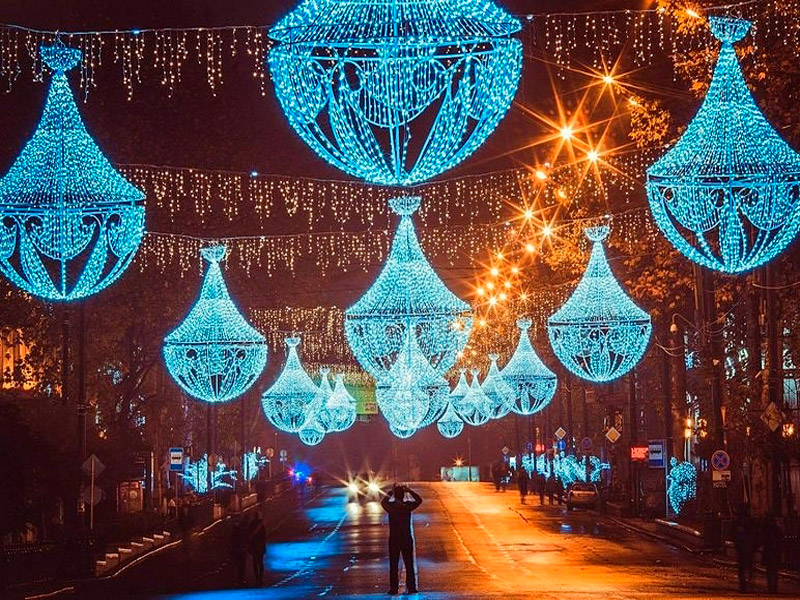 In Georgian families is widespread another tradition connected with the first guest called “mekvele”. It is believed that the first guest should be a kind and healthy person, preferably from among the close friends or relatives, and in this case, the year will be full of happiness and prosperity. Today “mekvele” is also associated with Santa Claus who brings gifts to children! New Year is celebrated in Georgia from the 31 of December to 2 of January.

Do you want to spend the New Year in Georgia? We are ready to offer you our fascinating New Year Tour to Georgia.

The Georgian Orthodox Church celebrates the Christmas on the 7th of January, as it is customary, for example, in Russia or Armenia. This is an important and solemn holiday for the country, as Christianity to Georgia is not just a religion, but also the main component of its culture and history. On the day of the Nativity of the Lord in all the churches of the country are held solemn liturgies, the people go out to the streets and together with the priests sing church songs. These massive walks called “Alilo” play a central role in a unique celebration of Christmas in Georgia. Dressed as shepherds, soldiers, well-known religious figures, or in traditional Georgian clothes, marchers congratulate each other and raise money for charity.