Every tourist before making a trip to a foreign country is firstly planning in details not only his route and the upcoming tour but also takes care of the financial matters. Today we will tell you in detail what currency it is optimal to take when travelling to Georgia, as well as help you to orient correctly in searching for the main currency exchange offices and banks operating in Tbilisi. Like in most Soviet republics, Georgia used the Soviet ruble before the collapse of the Soviet Union and restoration of the independence. However, in October 1995, with the establishment of an independent republic, the National Bank of Georgia put into circulation the Georgian national currency called “lari”. Since then lari has become the sole legal tender currency in the whole of Georgia. The word “lari”, selected for the monetary unit of Georgian national currency is an old Georgian word meaning “treasure” or “property”. 1 lari consists of 100 “tetri” – another old Georgian monetary term used from the 13th century.

The Georgian national currency is designed with an emphasis on the cultural heritage of the country. For example, on the front side of 1 GEL banknotes, there is portrayed notorious Georgian artist Nico Pirosmanishvili, amidst beautiful scenery. The portrait of Ivane Javakhishvili, a prominent Georgian academician, is depicted on 5 GEL banknotes. 10 GEL banknotes are issued with a portrait of Akaki Tsereteli, a prominent Georgian poet and a noticeable member of the new Georgian literature. 200 GEL banknotes featuring the image of Abkhazia and the inscriptions in the Georgian, Russian and Abkhaz languages are also interesting. 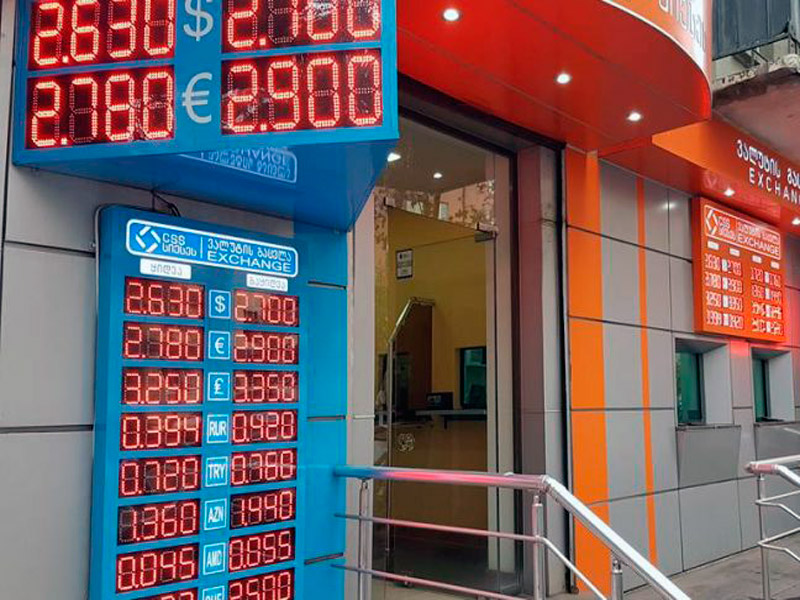 In Georgia, like in any civilized country, problems with currency exchange will not occur. The most common currency in Georgia is US dollars, euros and rubles. Among less common currencies can be listed the Armenian dram, the Turkish lira, the Ukrainian hryvnia, which can be exchanged in the main banks in the capital. You can exchange foreign currencies in many banks and specialized exchange offices, which are scattered all over Tbilisi. Currency exchange offices are mainly located near the metro stations (branches of Bank of Georgia), nearby hotels, large shopping malls and stores. In the markets and main streets, you can meet street moneychangers offering slightly more favourable rates, but we do not recommend using their services in order not to fall a victim of fraud. In Tbilisi and other major cities, ATMs accepting foreign cards are widespread, but almost most of them when converting currency into GEL charge a commission of about 2% -3%, which is extremely disadvantageous. In the Georgian capital, Tbilisi, you can use VISA, EuroCard, MasterCard, Cirrus and Maestro credit cards in major hotels and supermarkets, again the fees are applied, which is not profitable from a financial point of view. Large banks accept traveller’s checks.

In private shops, hotels, and especially in provincial areas this type of payment is almost impossible. Therefore, going beyond the capital or major cities, you should better have a supply of local money in cash, preferably in small denominations from 1-10 GEL, to avoid problems with change. It is also worth considering that outside the capital exchange rates basically fall, so take care to exchange money in advance.

US dollars in Georgia have the advantage. Thus, the most profitable way from the financial point of view to come to Georgia is having US dollars in cash. If you come from the CIS countries (Russia, Armenia, Ukraine, Belarus etc.) we recommend first to exchange the local currency at your home country into dollars or euros, and only then exchange USD or EUR into GEL in Georgia.

We also present the current exchange rates of GEL on 26/01/2017, however, taking into account that the Georgian currency is heavily dependent on the world currency leaders, the rates can vary significantly even during the day:

Virtually any currency can be exchanged in banks. In addition, you can learn about the current rates in Georgia in advance without leaving your home. We present a list of central banks and their websites. The information about the numerous branches and their addresses you can find on the official websites presented below. The websites of the banks also provide information about the current GEL rate in relation to foreign currencies. It’s also possible to convert money online using exchange calculators.