In Tbilisi, there are many beautiful parks and gardens, which serve as an essential oasis in the bustling and noisy city. Tbilisi city officials and residents themselves are concerned about the care of the green areas. Old and young like to spend their free time in the city parks, talking, slowly walking, playing chess or simply enjoying a good book under the shady trees. In this article, we offer you to get acquainted with the city parks and gardens in Tbilisi. 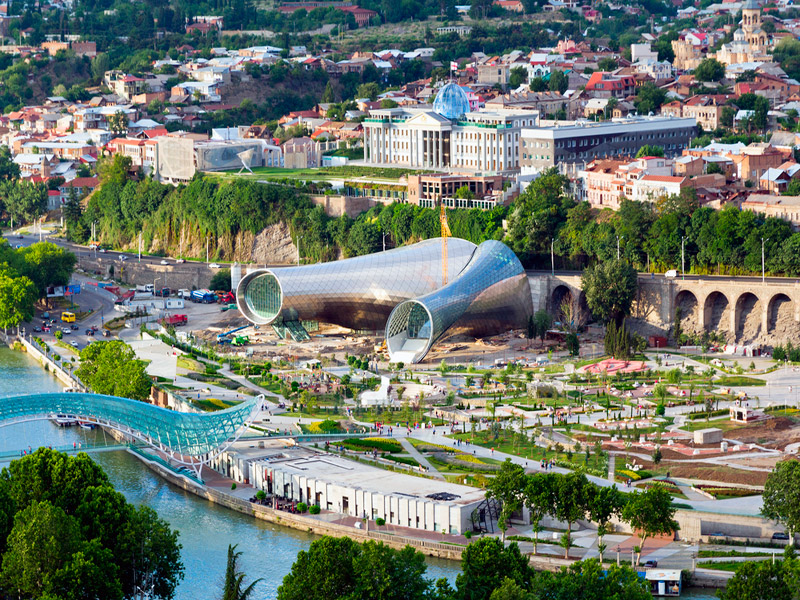 Rike Park is one of the newest and modern public recreational areas in Tbilisi, very popular among visitors and residents of the capital, especially in the summertime. Rike Park is located on the right bank of the Kura River. The road to the park is through the famous pedestrian Bridge of Peace, built of glass and steel in modern style. The newly opened cable car station allows quick and easy access right out of the park to the Narikala Fortress. Rike Park is built according to the concepts of Art Nouveau: here you will not find any traditional alleys and benches; the park is characterized by its originality and fanciful forms. During the summertime, the park is very active and crowded, and various evening musical programs together with the dancing fountains add joy and fun to the overall atmosphere of the city. 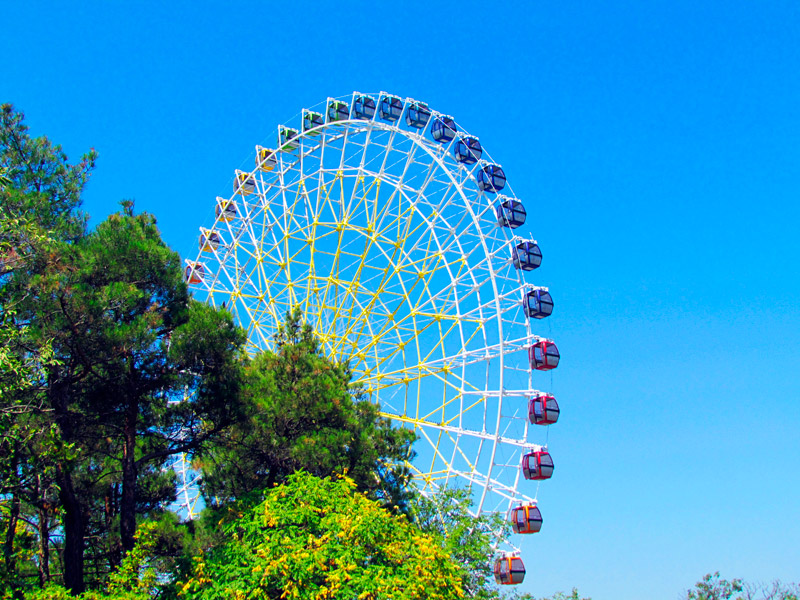 Mtatsminda Mount is the hallmark of Tbilisi and represents a great attraction with a variety of recreational areas. Mtatsminda in Georgian means “Holy Mountain”. Mtatsminda Park is the highest point in Tbilisi, located on the eponymous mountain, at an altitude of 770 meters. It enjoys captivating and fascinating views of Tbilisi. The park’s fairy tale setting alongside with modern attractions for children makes your stay fantastic and unforgettable. The park is divided into several thematic areas: kids’ area, family, and extreme. Here you can find plenty of cafes and restaurants, attractions, entertainment centres, and even a wedding palace. Special attention should be paid to the way towards Mtatsminda Park. It is possible to get to the park by cable car, which was built in 1905. Entrance to the funicular is on Chonkadze Street a few steps away from the centre. Tbilisi funicular is one of the most popular attractions in the city. By purchasing a plastic card all for 2 GEL you can pay for a ride on a cable car and repeatedly use it for a variety of attractions recharging it as necessary.

Mtatsminda Park also hosts The Georgian National Pantheon where prominent Georgian artists, politicians, writers, and the founder of the modern Georgian statehood Ilia Chavchavadze are buried. On top of the mountain, there is an amusement park “Bombora” with a huge Ferry wheel, roller coasters, water attractions and a room of fear – a real paradise for children! Thus, you will not have time to get bored. Tbilisi Botanical Garden was founded in the 19th century, but until the 1850s it was known as the “King’s Garden”, as the “royal gardens” were once planted on the site of this natural park. The Botanical Garden is located in the historic centre of Tbilisi, on Botanical Street 1, where the main entrance to the garden is, directly at the base of the mountain to the fortress Narikala. The Botanical Garden counts more than 3500 species of plants, some of which are unique and rare exhibits. The huge area of the park is a large garden of indescribable beauty, with fountains and real waterfalls with picturesque bridges over them. In the Botanical Garden, all conditions are created for a restful, relaxing past time in the shade of the trees where you will find plenty of benches and cosy pavilions. The garden is also ideal for lovers of cycling. The entrance ticket costs 2 GEL. The Botanical Garden is open every day from 09:00 -19: 00. Turtle Lake is especially popular in summer. The park is located to the east of the Museum of Ethnography, above the Vake Park. People escaping from the city heat, come here to picnic or relax in the cafés overlooking the lake. Turtle Lake, in Georgian Kus-Tba, is a small corner of wild nature, which got its name from the many turtles that once lived here. Park’s infrastructure is quite well developed: pebble beaches with sunbeds, cafes, and playgrounds for children, boats, and catamarans for boat trips. In summertime various parties in the open air, sporting events and competitions often take place here. Not far from Turtle Lake is the open-air Ethnographic Museum, which shows a miniature model of Georgia with its rich ethnic culture. 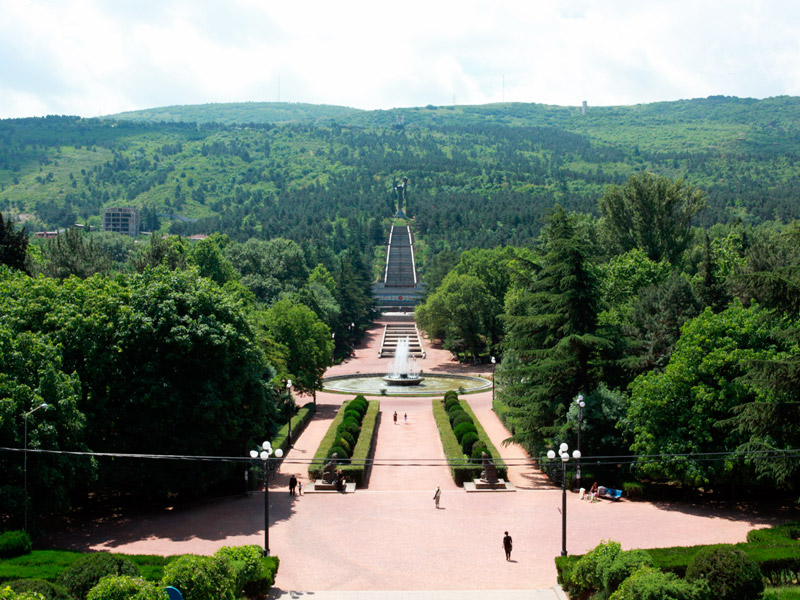 Vake Park was opened in 1946 and is located in Vake district in the western part of Chavchavadze Avenue. Vake Park is the largest park in Tbilisi, which is not on the top of a hill, hence its name is translated from Georgian as “plain.” A monumental cascade staircase leads to the top of the hill, from where you can walk in 30 minutes to Ethnographic Museum and Turtle Lake. In the park, people usually meet, play sports, make cycling. There is also a Ping-Pong table, so do not forget to bring your racket and ball! The park has a variety of leisure facilities such as outdoor cinema, cafes, bars, and restaurants. This is the best place for recreation, walking, and entertainment.

Vera Park is located just a few steps from the Tbilisi Philharmonic. This small park is ideal for relaxation. Vera district is one of the most beautiful and oldest districts of Tbilisi, with houses of the 19th and 20th centuries, pine trees and small shops. Fresh air, cosy atmosphere, chirping birds, the sounds of the fountain and a children’s happy laughter – is an integral part of the Vera Garden. 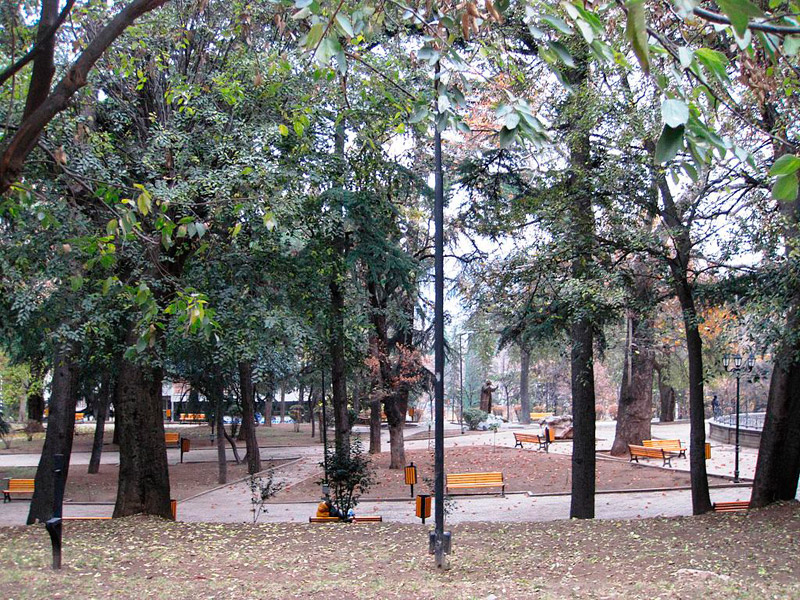 The park is located in the heart of the capital on Rustaveli Avenue. This is one of the oldest parks in Tbilisi, which is famous for its old pine trees. Initially, the park had a different name – Alexander Park, named in honour of Emperor Alexander II. As a result of the tragic events of April 9, 1989, when in the course of anti-Soviet rallies many civilians were injured and killed the park was named “April 9”. The National Gallery of Georgia, which is commonly referred to as the “Blue Gallery” is located on the territory of the park.

Mushtaidi Park was established in 1830 by Mir-Fatah-Agha, an Iranian religious. Accused of espionage during the Russian-Iranian war, he was exiled from Iran in 1828 and was granted asylum and 5 hectares of land in Tbilisi. After his wife Nino’s death, Mir-Fatah-Agha buried her near his house and planted roses around her grave. This was the basis for the future park. Mushtaidi Park gained public status in 1858. It has become a popular venue for performances and receptions. The first children’s railway in the world which is 1.2 km long was opened in this garden, July 24, 1935. Children’s railway almost unchanged operates to this day. Georgian State Silk Museum is located within the park and is one of the oldest in the world.