Folk music and polyphonic singing in the culture of Georgia are as important as the fantastic food, excellent wine, and hearty toasts, with which the country is famous. Surrounded by the spectacular beauty of the Caucasus Mountains, Georgia’s music is inextricably linked with the geographical isolation of the country. In conditions of isolation for centuries, from antiquity to the modern era, surprisingly rich folk singing traditions developed. Georgians created their complex harmonies from pre-Christian times: they sang at home, in the fields, at festivities and mourning. A characteristic feature of folk singing was a fascinating vocal polyphony comprised of 3 and more voices. Magnificent and piercing tones of the Georgian polyphony cause aesthetic pleasure and tears come to your eyes. Today we want to introduce you to the history and traditions of Georgian polyphonic singing. 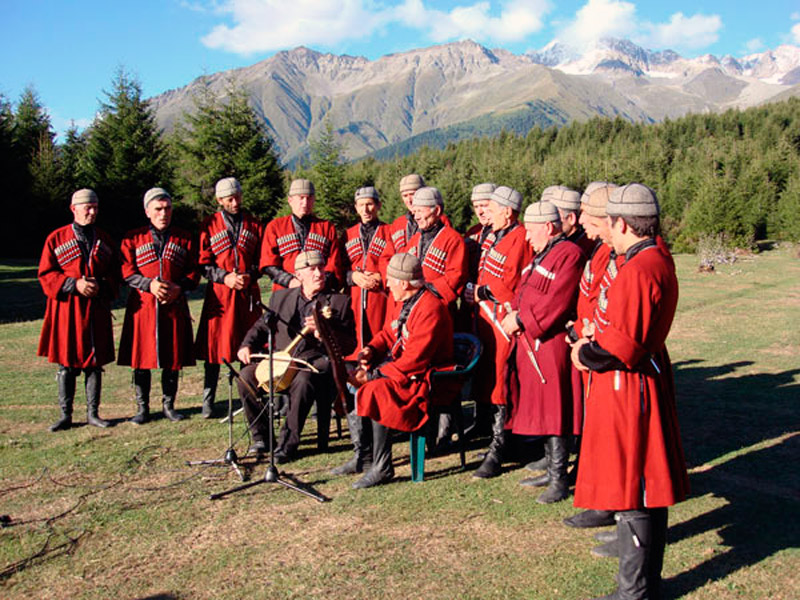 Every Georgian is proud of the traditional songs and musical culture of his country. Georgian multi-voiced singing is an invaluable tradition, inscribed on UNESCO’s intangible cultural heritage list. By tradition, typical Georgian songs are performed by men, with at least three vocal ranges. The song “Chakrulo” is the best example of Georgian polyphony. Together with other artifacts of the various cultural heritage of the Earth,  it was released into open space on the “Voyager” shuttle in 1977.

The tradition of polyphonic singing in Georgia had developed over several hundred years before it appeared in Western Europe. Polyphonic singing has always had its natural place in Georgian society; it used to be performed both at holidays and in everyday life and still continues to be an integral part of Georgian culture. Due to geographical characteristics, namely the isolation of one region from others by high mountains, each region developed its own authentic manner of singing. In Georgia, there are three types of polyphony: complex polyphony, which is common in Svaneti; polyphonic dialogue with bass on the background, common in the region of Kakheti in Eastern Georgia; contrast polyphony with three partially improvised parts, characteristic of Western Georgia.

Georgian vocal music developed independently of the Western European rules of harmony. Its scale is based on the fifth, not the octaves, intervals are not tuned to each other, all this gives the music a rich and intense, but slightly unusual to the western ears sound. Singing is an integral component of the legendary Georgian hospitality and is an important part of the Georgian feast. Supra – the Georgian feast – can last for several hours, and will necessarily include long and eloquent toasts, followed by a corresponding song. Different genres of folk songs include such varieties as mushuri (work songs), supruli (feast songs), satrpialo (romances) and sagmiro (epic songs). Some of the richest, most sonorous and seemingly wine-saturated songs are predictably from Kakheti, the wine capital of Georgia. In the south, lyrical solo songs performed during plowing or riding are more common.

Church music is slower, softer and more melodic, compared to folk songs. Chants in the style of polyphony are performed so harmoniously that it seems as if the singers do not even breathe. The Hymn to the Virgin “You are a vineyard” (Shen Khar Venakhi ), is one of the most famous examples of medieval polyphonic music, which has become so firmly entrenched in everyday life that it was performed at weddings. The mixing of folk and ecclesiastical tradition of singing marked the beginning of a new genre – “folk-church” songs, for example, the well-known “alilos” sung on Christmas Eve. Unfortunately, 70 years of Soviet repressions negatively influenced Georgian traditional music, and some of the songs were forgotten forever. Since the collapse of the USSR, musicologists have collected and revived old songs. Great work in terms of promoting and preserving Georgian polyphonic singing was done by the State Academic Ensemble of Folk Song and Dance named after Rustavi. The ensemble “Rustavi” performed at more than 4000 concerts and festivals around the world and recorded more than 600 folk songs. It is the leading vocal ensemble of Georgia. Each singer is both a soloist and choral musician.

Anchiskhati Choir is another leader in Georgian polyphonic choral music. Members of the choir specialize in the singing of ancient Georgian sacred and folk songs with authentic Georgian instrumental accompaniment. Anchiskhati choir members come from different regions of Georgia. Thanks to this, each singer is the bearer of the unique singing heard from grandparents in childhood. Anchiskhati choir teachers, popularizes, conducts workshops and regularly performs in the ancient Anchiskhati Church in Tbilisi, where you can still listen to their divine performance on Sundays. It is worth noting that the Anchiskhati church dates back to the sixth century AD and is the oldest Orthodox Church in Tbilisi, the capital of Georgia.